Apple's T2 Security Chip gets itself in the way as much as possible when attempting to install Linux on a Mid 2019 Macbook Pro and a lot of the available documentation for Linux-on-the-mac online is pre-T2. After quite a bit of back and forth and eventually finding the right resources I managed to get Ubuntu installed on my MacBook Pro with everything working... except the microphone.

Getting started with this process was a bit of a minefield. The first resource I came across was How to Install and Dual-Boot Linux and macOS, an extremely detailed and useful documentation piece with one minor caveat (that I didn't take heed of initially):

As of right now, you cannot install Linux on the internal SSD of a newer MacBook Pro or Mac Pro (2018 or later). You can still install on an external drive, however.

Despite the warning I did manage to eventually cobble together a working base Ubuntu install using Ubuntu 20.04, a bootable USB-C drive (notably: not a USB-A adapter), and rEFInd. In the end I had a functional Ubuntu installation on the same internal SSD as my macOS install but none of the peripherals (keyboard …

A few months back I started a new job with a much greater focus on development work over IT systems management. Unfortunately this has led to a pretty big drop off in amount of time spent on personal side projects, but happily my new employer is fully supportive of open source and I am able to release much of what I work on to the wider community.

I have recently pushed three projects out:

It has been interesting returning to the world of PHP after focusing so heavily on free time personal projects in Python. I am saddened to find myself away from the (much) less verbose syntax of Python, but happy to be back in the language that I grew up hacking on.

A user attempting to install Baby Buddy submitted an interesting issue with the following error during the pipenv install process:

Hash checking and Pipfile.lock are a part of the pipenv toolchain and meant to verify the integrity of packages being installed. Committing the lock file is recommended practice and generally something I have not had many problems with. There are some old tickets on GitHub reporting issues with this hashing between operating systems, but the latest versions of pipenv supposedly do not have these problems.

Why is this user getting a hash match error? I had a Pi lying around, so I decided to try replicating the issue. Many hours later, I got Baby Buddy up and running on my (second) Pi and learned a lot about the Python packaging process and how …

Ok, not really (: This challenge involved making specific modifications to a list 1,000,000,000 (one billion) times. Out of curiosity, the first thing I did was set up a progress bar loop to run the actual modifications all one billion times. The resulting progress bar estimated that the entire operation would take around 133 days. So... a different approach:

Because the movements are always the same, eventually the positions list elements will return to their initial state. In this case, that happened on the 41st movement, making for a possibilities list of size 42. Armed with the answer to the ultimate …

I fought with how to create and navigate a hexagon grid for a bit before I stumbled on an extremely useful post by Chris Schetter: Hexagon grids: coordinate systems and distance calculations. Working in 2d grids (with four possible movement directions) in Python is fairly easy with some dictionaries, but a hexagon grid means there are six potential directions and simple calculations of x,y coordinates won't quite get the job done. What Chris explains so well is a simple concept: flip the grid and add a z-axis.

For my solution, I "flip" the grid by turning it to the right twice such that north and south become east and west:

This puts north and south along the x-axis instead …

Another simple revelation on built-ins from this challenge: the key argument can be used to modify what is evaluated by the max function. This concept is explained in detail as part of the accepted answer to this Stack Overflow post: python max function using 'key' and lambda expression.

For Python dictionaries, this means that the get() method can be used to return the key of the maximum value in a dictionary. This works because the max function sends each of the dict keys to the dict.get() method and evaluates that result instead of the key itself. Without this argument, max will actually evaluate the dictionary's keys, which isn't terribly useful:

This challenge taught me about Python's built-in zip function. The basic goal is to compare values in a list with specific positional relationships to other values (e.g. next to, X steps from, etc.) in the same list. zip assists with this task by combining multiple lists in to tuples. My initial solution used a construct similar to:

I taught myself Python a few years ago by following the wonderful Learn Python the Hard Way (LPTHW) series by Zed A. Shaw. Since then, I have spent a decent amount of time in Python largely in the Django framework. Django is a lot of fun to work with because it abstracts away much of the complexities of developing a full-featured web application in Python. In this way, however, it has also led me to forget some of the basic Python that I learned through LPTHW.

In order to recapture some of those early lessons (and maybe learn a few more Python 3 specific ones), I worked through (part of) the 2017 Advent of Code, a 25-day, language agnostic programming challenge series developed by Eric Watsl. I originally thought about using the series to learn a new language, but eventually realized that I still have a long way to go in Python.

This series explores my (often very basic) revelations and lessons learned while completing 20 of the 25 days of challenges (vacation travel cut the series short for me). The code I used for each day is available on GitHub. Also check out the advent-of-code and advent-of-code-2017 GitHub topics …

Back in April, I learned about Timestrap, a self-hostable, Django-based time-tracking project from a post on HackerNews by Isaac Bythewood. As I have been learning Python in the past year or so, I reached out to Isaac and started contributing to the project. After getting familiar with the core application, I turned my attention to testing and eventually found my way to Selenium, a collection of browser automation tools used for frontend testing.

I had never worked with Selenium or other automated testing products, so it struck me as a great opportunity to get my feet wet in something new. After getting things up and running, we quickly learned that the test results were quite inconsistent across development environments - even to a point that occasionally tests would succeed when run individually, but fail with the full test case.

After much trial and error, we have settled on a (mostly) consistent setup for testing with Selenium, Python and SauceLabs. This produces much better results than testing in development environments and crossing fingers during CI. Hopefully this primer will help others facing similar challenges (as we had a lot of trouble finding good material on the subject). 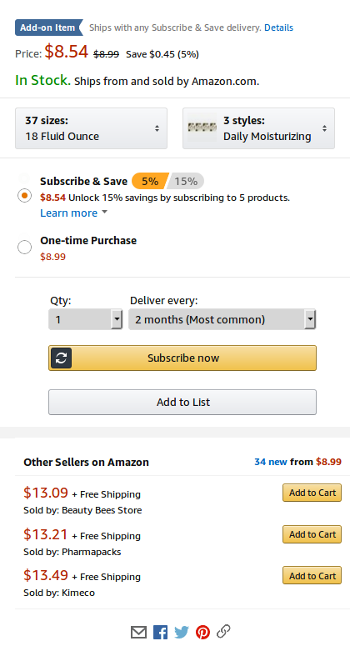 I was recently shopping online for a specific type of lotion (my skin seems to hate all other types). I am somewhat predisposed to avoid Amazon.com because its size and increasing dominance of online shopping concerns me as it moves closer and closer to "shopping" (in the sense that "searching" means Google to most people). However, my biggest reason for avoiding Amazon.com is simpler: it has become incredibly confusing to shop there. Searching for just about anything will yield thousands of results and it takes (me) a lot of effort to determine which one is appropriate. This can be a great thing in a lot of cases, but more often than not it feels more like navigating a minefield of deceitful listings than comparing competing products.

This lengthy post evaluates one example - Aveeno "Daily Moisturizing" lotion. As with most personal care products, when searching online I pull up a couple of websites to compare prices. In this case I pulled up Amazon.com last, searched for "Aveeno" and was impressed to see just what I was looking to compare (the 18 oz., non-SPF version) as the first result. I clicked through and, curious to figure out the price …